The music is the medium.

After concluding a recent tour along the West Coast, I found myself reflecting on quite how much music has in common with the communications strategies we’re building each day. The core objective is surprisingly similar – to connect with an audience through a persuasive platform, sharing your message in the hopes of achieving a mutually beneficial goal. There is a lot to be gained and learned from observing the cross-function of disciplines, and PR is no exception.

One of the fundamental building blocks of communication was first theorised long ago by Greek philosopher Aristotle, who posited three key components of persuasion: Pathos (Emotion), Logos (Reason), and Ethos (Credibility). We can see these still apply today across almost every facet of the marketing mix, from advertising to speechwriting, marketing, and of course, public relations. At the heart of these activities is the desire to communicate an intended message and trigger a desired response, forming the foundational basis of rhetoric across both verbal and non-verbal modes of communication; and something that can be observed across the way we share and consume music.

Pathos – Music without emotion and heart is ultimately just funny-sounding vibrations of air, and the way we communicate verbally is no different. Consumers do not respond well to messaging that appears disingenuous, bland, or deceptive at inopportune moments, such as through infamous ‘corporate-speak’. To cite a recent music-based example, New York collective ‘Brass Against’ recently attracted controversy at the Welcome to Rockville festival when lead singer Sophia Urista made the (fairly egregious) decision to publicly urinate on an audience member’s face. Needless to say, this presented quite a big problem for the band’s public image, but what catalysed the bigger issue, was the band’s official response:

Innocuous, innocent, inoffensive even. But the disparity between the outrageousness of the singer’s actions and the drab and casual ‘apology’ blew what was at first a hyper-local issue into global proportions with the since-viral tweet. While we might not see it on every job application, emotional intelligence is one of the most imperative skills for those in communications industries. Walking the line between tightly controlled messaging and genuine human expression is what makes all the difference between a consumer connecting with a brand, or ‘raging against the machine’

Logos – While logic might not be the first thing that comes to mind when describing music, songwriters use modes of persuasion available to them when attempting to convey their message. Often this involves drifting between the expected and unexpected, playing into audience expectations of genre boundaries and recognisable patterns enough to be familiar, while remaining self-aware enough to offer something new. Musicians have an arsenal of tools at their disposal to do this, such as tempo, key, rhythm, time signature, and melody. Communicators have access to a very similar toolkit, though as language is one of our most basic communication indicators, it can sometimes misleadingly appear rudimentary. Language should never be boring. It’s only boring when misused. Good writers should direct the flow. Does this feel monotonous now? What about now? 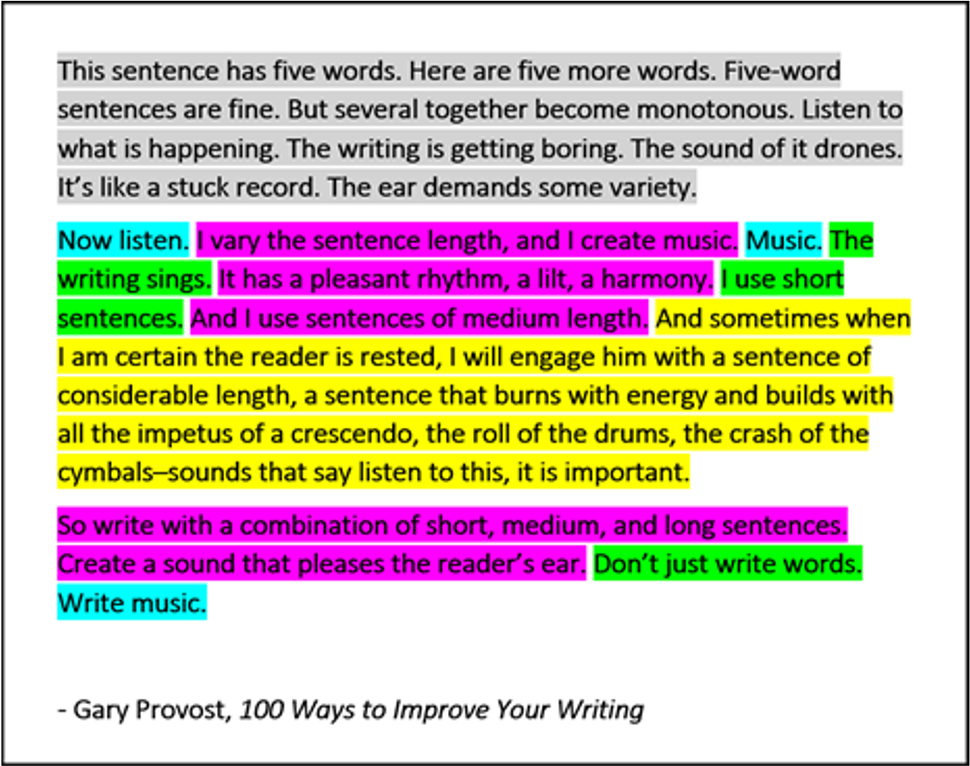 Did you feel that release as we broke away from the pattern? Language is only boring in the hands of someone who isn’t harnessing its potential, an idea writing analyst Gary Provost was very familiar with. While those sentences might read ordinarily, the repetition of five-word sentences concurrently jars on the mind. Varied sentence length, syllables, choice of diction, rhythm, and pause are all weapons in the writer’s ability to persuade their audience and take them on a journey to the desired destination. Music is much the same; motifs and hooks are powerful enough to draw their audience in, but misuse or overuse them and they cease to carry the same meaning and instead inhibit the audience’s ability to process the message you’re working to communicate. While our key messaging should always be steadfast in resolve, it’s worth considering how we’re communicating it just as much as what we want to communicate.

Ethos – With audiences demanding greater identification, more and more musicians have begun taking a clearer stand on social and political issues rather than fence-sitting through the middle. While exclusionary for some, this results in heightened brand alignment for those who connect with the message in a more authentic way. It’s important that brands today recognise that to not assert a position is in itself a position, and a privileged one at that.

The external circumstances of a song or campaign can affect the credibility and authenticity of the message even before articulating one. More than half of communication occurs non-verbally, and while often our work might not necessitate face-to-face conversation, the external factors surrounding the message are equally important as the message itself – brand image, authority in the space, and corporate credentials are all key factors in establishing ethos.

Ethos is ultimately one of the most interdependent elements of persuasion to deploy. It cannot simply be crafted or designed. It requires a negotiated understanding of the brand’s positioning and credibility that is co-opted by consumers from the company that is trying to reach them. That said, a learning we can take here from music ironically comes from its absence – silence. ‘Rests’ are a key ingredient in crafting a successful song, they punctuate the beginning and end, appearing intermittently to emphasise key moments. What is most important about silence, however, is that music can never objectively appear ‘quiet’ or ‘loud’ without its presence. Sometimes to say nothing, says more than saying anything at all. This operates in a similar way for public communications – communicating on every issue or trying to maintain a ‘catch-all’ approach can instead have the opposite effect of mitigating the significance of when a brand does have something significant it wants to say. Every decision to include or omit comment on an issue is charged with power and communicators are the ones who wield this.

This is why it can be disconcerting when a brand like BP begins to champion climate issues in its since pulled “Possibilities Everywhere” campaign. While earnest in its intent, BP hasn’t established credentials in the renewable energy space – a process which takes time and repeated investment to build trust. While transparent in their approach to engage and support renewable energy offerings, what remains ‘unsaid’ in their broader work with oil and fossil fuels has a jarring effect for the audience who instead question the credibility of these claims rather than examining their merit. Although sometimes scary to admit, an acknowledgement that work is needed and that a brand is not an omnipotent entity with the ability to ‘be and know all’ goes a long way in carving out a more individualised brand identity that will improve corporate credibility and the audience’s ability for identification.

The cultural role of music seems to be more and more in flux with each year that goes by, but at its heart still bears the same aim to connect to people with genuine authenticity. This human desire to connect is something brands can continue to rely on for many years to come as one of the most fundamental components of the human condition. If we can capture and ignite the attention of our audiences through entertainment and considered persuasion models that factor in two-way communication, we’ll be one step closer to a harmonious relationship where both consumers and brands can feel heard on the topics that matter to them.

Do you want to get in touch?

Herd MSL is an ANZ public relations and integrated communications agency that provides strategic counsel and creative thinking. We champion our clients’ interests through fearless and insightful campaigns that engage multiple perspectives and holistic thinking to build influence and deliver impact.